Before I begin to discuss Stricker’s Move 1, it is necessary to briefly summarize how Rotary swing classifies the correct sequence for the Takeaway.
1.    Golfer in proper posture, in the box with the lat muscles engaged.
2.    Hips shift 1 inch right transferring approximately 80% of the weight into the right heel (right hip almost to the point of being directly over the right ankle.)
3.    Right shoulder blade glide (pulling the right shoulder) focusing on moving the scapula two inches in and slightly down toward the spine.
4.    Torso turns 45 degrees.
5.    Hips turn 0 degrees.
6.    Arms remain passive, straight, and directly in line with the sternum. 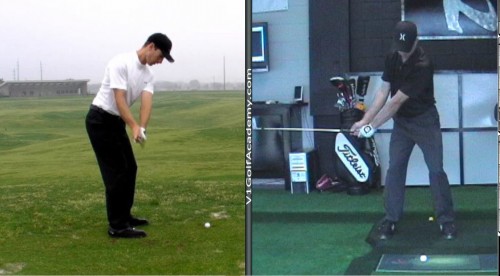 Given our understanding of the forces of rotary motion (please see the blog “Why Can’t I Stay Centered?”), we know a pulling motion is an action that moves an object toward center, while a push is a force moving an object away from center.  It becomes quite clear that we must invoke a pulling motion in order to efficiently turn the torso in a fashion that keeps us centered during the backswing.  This move also serves as a spine stabilizer during the backswing, in turn, protecting the spine during this phase of the swing.  Any origin of movement that comes from the left side of the body is a push, and Stricker’s Move 1 is a prime example of its effects.

Stricker initiates his swing with a forward press of the hands.  The club is subsequently started back by a pushing motion from his left side.  His left arm pushes across his chest which immediately causes a disconnection from his core rotation. 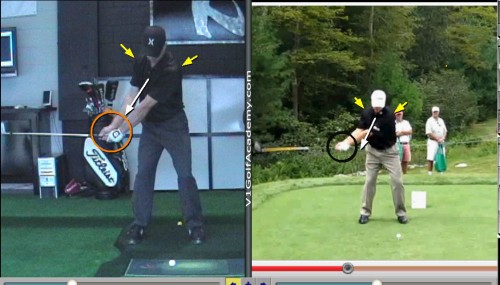 He is now at the mercy of his arms to turn his shoulders, which can be observed by looking at the figure above.  Notice the difference in shoulder turn between Chuck and Stricker as the club is parallel to the ground.  It is quite clear that the arms have been forced significantly behind Stricker’s sternum by this point.  As a result, the right arm is no longer straight, but instead has been forced to bend.  In addition, the left wrist has begun to pronate, as can be observed by the circles. 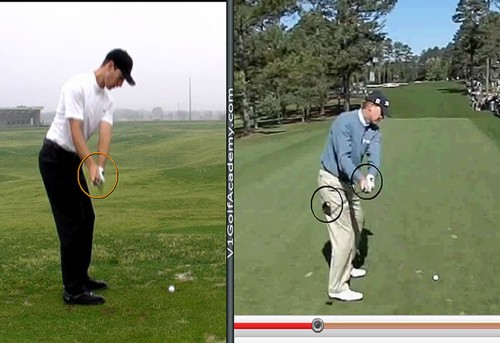 Pay particular attention to the logo on Chuck’s glove as compared to Stricker’s glove.  The culmination of these movements results in the club getting inside, the hands and arms working too deep, and the club being moved on a flat plane.

« A Shift in the Right Direction
Rotary Swing Golf Instruction ... »