A two time winner on the PGA Tour, Anthony Kim represents one of the many young, rising talents who has made people sit up and take notice every time he tees it up at an event.  He earned his card through qualifying school in 2007, and made quite the splash during his rookie season notching four top ten finishes.  When examining AK’s statistics from his injury riddled 2009 season, his ball striking numbers were quite fascinating given the much discussed “simplistic” nature of his swing.
Driving Distance:  16th
Driving Accuracy: 175th
Total Driving: 103rd
Greens in Regulation: 164th
Let’s take a look from an RST perspective of both the positives and negatives of Kim’s golf swing.

SETUP
Looking from the face on view, we can immediately notice that Kim’s stance is much wider than 2 inches outside of neutral joint alignment.  This places him in an anatomically inefficient position, which is going to force him to move laterally during the backswing. 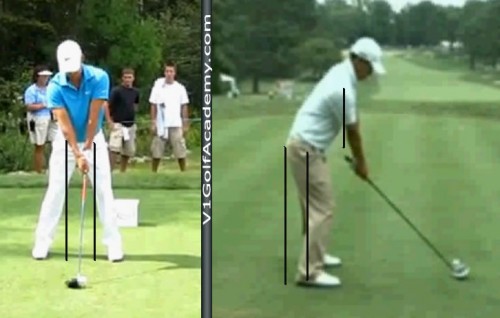 From the down the line view, we can see Kim could use more hinge from the hip.  Take notice of the line drawn from his posterior to the ground.  The lack of space from this line to the back of his heels is a clear tell he needs more hinge from the hips.  When examining his weight distribution, the back of Kim’s knees are not directly over the center of his ankle joints, which informs us that his weight is on the balls of his feet at address which will place unwanted rotational stress on the left knee during the downswing.  Finally, the elbows are extended outside of the shoulders, which indicates a slight reaching for the ball.  The farther we extend our arms, the more the weight is shifted to the balls of our feet.  To briefly summarize, Kim is not grounded and anchored correctly at address which places the body in an anatomically incorrect position.

MOVE 1
As Kim starts his takeaway, he makes an excellent shoulder turn away from the ball.  There is no evidence of arm swing, and as he finishes Move 1, his arms are straight and remain directly in front of his sternum.  In addition to a wonderful shoulder turn, I want to highlight the lack of hip rotation.  Kim executes Move 1 by turning his shoulders 45 degrees and the hip turn is almost 0 degrees, exactly the way RST defines Move 1. 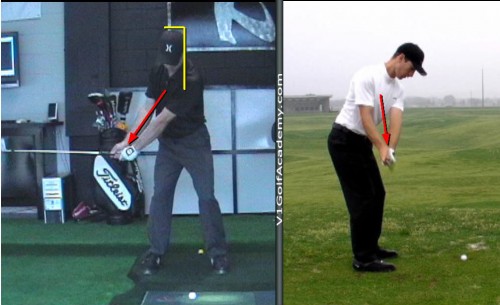 Although Kim executes Move 1 very well, his excessively wide stance forces him to have an exaggerated lateral shift to the right.  We have talked at great length in the past of why lateral movement is undesirable in the golf swing, and if you would like to read more please refer to “Why Can’t I Stay Centered” blog.

MOVE 2
As with many players that I encounter on a daily basis, AK starts to get in some trouble during Move 2.  Once the shoulders turn 45 degrees, we need to employ some shoulder elevation to keep the club in front of our chest, keep the club on plane, and prevent the arms from working too far around the body.  AK fails in this critical area.  Take note of his hand position in the following picture.  The arms have nowhere to go when they remain pinned to the body in such a manner.  The club subsequently now works too far around and behind the chest as he arrives at the top of his swing.  In addition, take note of how Kim’s back foot has rolled to the outside.  He has failed to roll the ankles in slightly at address, and once the weight moves to the outside portion of the right foot during the backswing, this makes it much more difficult to transfer the weight efficiently back to the left in the downswing. 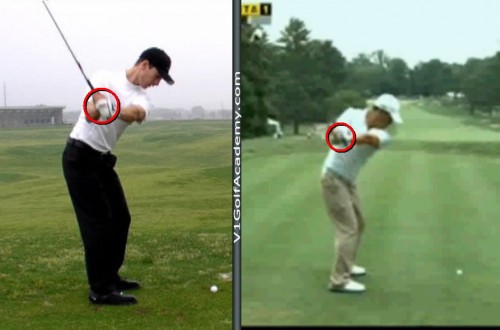 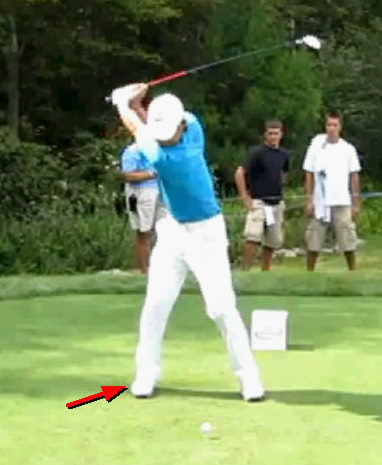 MOVE 3
From my multiple film study of Kim’s swing, I found a very interesting trend.  There were some balance inconsistencies in a number of swings I examined.  For example, on certain swings I noticed the left heel spinning out indicating the weight had been transferred onto the ball of the left foot in the downswing. 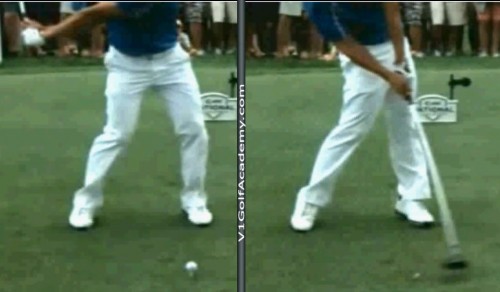 In another example, Kim fell backwards slightly indicating his weight was still trapped on his right side. 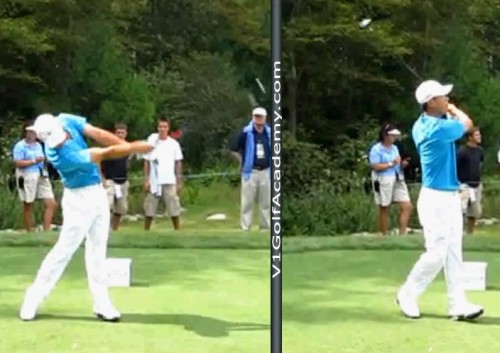 The penultimate issue that I see causing the downswing problems reverts back to the arms being trapped behind the body due to the lack of shoulder elevation.  This paired with the wide stance and the weight shifting to the outside portion of his right foot certainly will cause weight transfer issues even for a golfer with tremendous talent.  Kim displays tendencies to push from his right side in the downswing to compensate for the lateral shift exhibited in the backswing, note the right foot is quite active.  This pushing move, in addition to Kim’s aggressive hip rotation will accentuate the arms getting stuck behind him on the way into impact and may help explain his 2009 ball striking statistics. 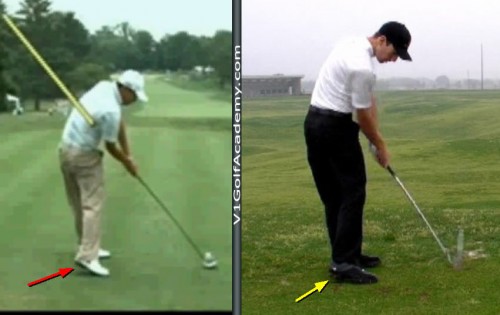 « Increase Golf Swing Speed by 1...
Olympics Serve as Reminder Why... »