Why Can’t I Stay Centered?

Why Can’t I Stay Centered?

I am entering my seventh month as a certified RST instructor, and the number one issue that I see plaguing my students is the ability to minimize head movement and stay centered during the swing.  While it may seem benign enough, I can tell you this problem destroys speed, power, and efficiency of the golf swing.

Examining the golf swing from a purely scientific perspective, we can all agree that the swing is circular.  It stands to reason that we can summon upon our tedious days in physics class to further understand the laws of motion that govern our golf swing.  Who knew our college general education requirement could help us hit more greens in regulation?  The diagram below illustrates the forces at work during circular motion. 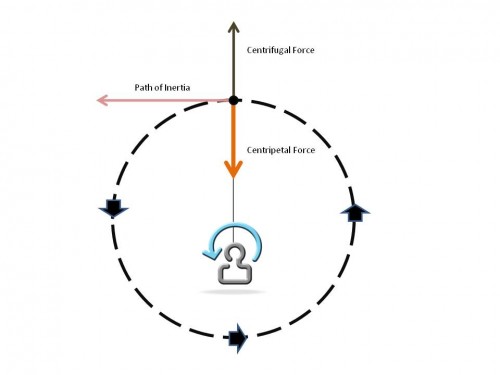 The Rotary Swing is based upon creating centripetal force.  Centripetal force can be defined as the component of force acting on a body in curvilinear motion that is directed toward the center of curvature or axis of rotation.  Using the diagram above, we can plainly see that the origin of movement is the figure rotating in the center of the circle.  The figure rotates in order to swing the ball on the end of the string in a circular fashion.  The faster the central figure rotates, the faster the ball will travel at the end of the string.

What would happen to the speed and path of the ball if the central figure moved several inches to the left or right during this rotation?  Would the ball on the end of the string accelerate at a greater rate?  You don’t need a Ph.D. to recognize that once the fixed origin of movement is moved, the resulting path of the ball is disturbed by the added lateral movement.  This is exactly what happens to a golfer that exhibits excessive lateral head movement as the swing begins.  The origin of movement has been disturbed, negatively affecting the speed, power, and efficiency of the resulting swing.

Hope I did my college professor from American University proud with my contrite explanation of circular motion, but now the question becomes, how do I stop this from happening in my swing?  This is what we golfers really care about; no offense Mr. Newton.

First, check your stance width.  Remember that advice you received about your stance being shoulder width apart?  Let’s think about that for one moment.  As Chuck Quinton so eloquently stated to me, “The last time I checked, my legs and feet were attached to my hips, not my shoulders.  Why would the width of my shoulders have anything to do with how wide I want to stand?”  Rather than using the shoulders, the Rotary Swing provides an exact measurement for each golfer to find the appropriate stance width to maximize the swing base and prevent excessive lateral head movement: you must have the center of each ankle joint two inches outside of neutral joint alignment.  In other words, the center of your ankle joint at Setup will be positioned two inches outside the center of your hip joint on each side.  Any wider than this, it becomes very difficult to prevent lateral head movement during your backswing and will interrupt the creation of rotary motion.

Second, in order to create a truly rotary motion, make a full shoulder turn, and minimize lateral head movement, the golfer MUST pull the right shoulder (for right-handed golfers) behind his head to create the desired backswing.  To most golfers, this will feel quite alien in nature, as almost all golfers start the swing either with the hands, arms, or left side.  Any such movement to start the backswing forces the golfer away from center and now has the golfer moving in a linear fashion.  The head and upper body are forced to follow the motion, and the result is a swing sapped of power.

RST’s goal is to create movement that rotates around the spine while staying centered.  If you have been scratching your head asking that perplexing question, “Why can’t I stay centered?” I just provided you with two possible answers.  Check that stance; work on pulling that right shoulder behind you to start your swing, and pay attention in physics class!